Often described as a 'shock response', the wild turkey tom will gobble at a wide variety of audio stimulation's or sounds. On some days it seems he will gobble at any sharp, sudden noise. Other days find the gobbler in a vocally sullen mood, and the sounds he will respond to are more limited. 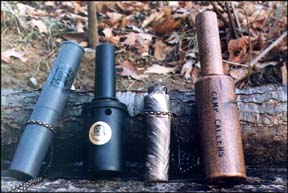 Turkey hunters take a keen interest in sounds or calls that will consistently make him gobble, because this is often the primary method of finding a bird to pursue. Locating roosted turkeys at dawn and dusk enables critical hunter positioning to intercept the bird during legal hunting hours.

In the grey light before dawn, hoots of the barred owl are a natural sound that turkeys gobble at from the roost. Owl calls are of two types; the barrel hooter is easiest to use, sounds authentic but doesn't project very far on a windy day.

Louder and slightly more difficult to master is the reeded owl call, which is built, similar to a duck call. The caller's hands, cupped around the open end of the call control the sound. Check our catalog for several new reeded owl hooter designs that make using the most realistic call a lot easier. With a longer range-effectiveness, coyote howler calls are also very good in locating gobblers at dawn. 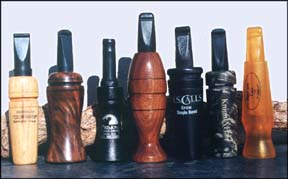 As dawn turns to day and crows patrol the woods with their raucous calls, toms begin shock gobbling to crow calls. Many hunters favor the crow call as their best gobbler locator.

There are many additional bird and animal calls in the MIDWEST catalog that are effective in making turkeys gobble. the particular conditions of any given day often cause one locator call to be more effective than another.